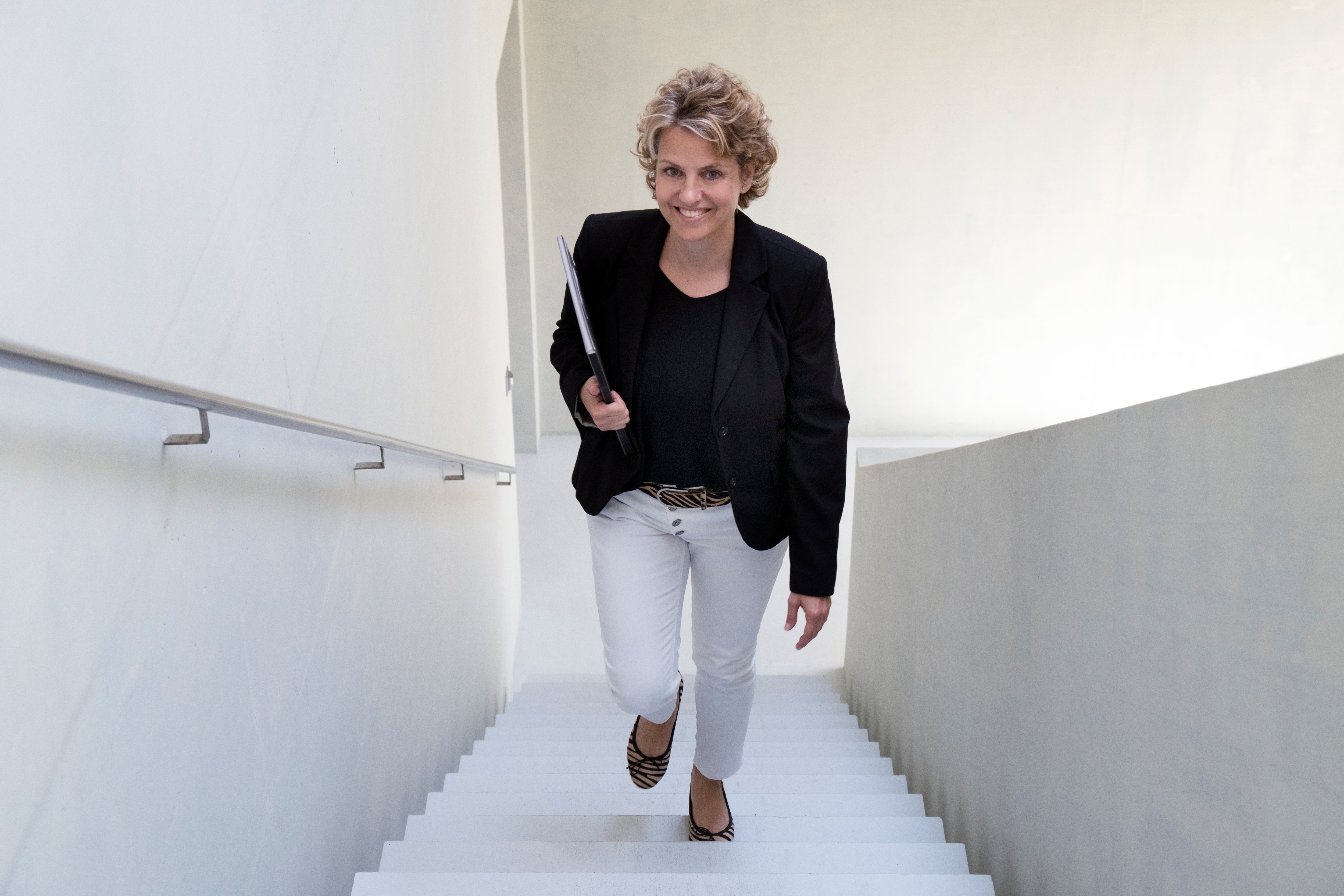 Always in a hurry, always a cheerful smile and the question: "How are you?" if we run into her. That's how everyone here knows Iris Gisler.

In an interview with Silke Landtwing, Manager Corporate Communications, she revealed what's behind the good-humoured power-woman from the human resources department, where she gets her energy from and what she enjoys most about her job at Leister AG.

Iris, you have been employed at Leister AG as Manager Human Resources since December 2013. How did you learn about Leister at the time?

That was a good coincidence. I was on a trip around the world and when I came back, I was looking for a new job. At that time, Leister had just advertised the position for a Human Resources Manager. Since I grew up in Obwalden and have roots here, I knew about Leister for a long time. Also, my brother has worked here for more than 25 years and thoroughly enjoyed his experience here, which led me to applying for the position. I remember exactly what I said to Michael Sigrist, Chief Human Resources Officer, when he called me and gave me the good news: "Mr. Sigrist, you have no idea what a pleasure it is to hear this exciting news!"

I really wanted to join Leister, because I was attracted by both the equipment and the industries, as well as the international environment. Something completely new for me, and that is exactly what I was looking for at the time.

What training is needed to do such a job?

I first completed a commercial apprenticeship in the insurance sector and then continued working in the insurance industry. While working, I completed my training as a Swiss Certified Insurance Specialist and then added the Swiss Certified Marketing Planner to this training. However, I soon realized that not all facets of marketing appeal to me equally. This concerns mainly market research (statistics) and the calculation of market shares within distribution channels. It was just too dry for me.

More by chance, I was then offered a position in the human resources department at AXA Winterthur. As the Human Resources Manager, I suddenly had responsibility for around 70 trainees within a management area and was also the contact person for the claims department staff. I was literally thrown in at the deep end at the time and then, while I was working, I completed my training as a Swiss Certified Personnel Specialist. I was fortunate that long-standing practical trainers gave me very good support when I started, as well as later on.

How long did you work at AXA?

16 years in total and in various positions. I began working in a sales-oriented position at a service agency. After my supervisor became ill, I became more active in the field and visited insurance customers so I could advise them. After staying in England to improve my English, I was given two temporary jobs; one as a clerk in the corporate and brokerage business, followed up by a transition to the property damage department. Afterwards, I moved to the training center to train prospective sales representatives. In January of 2005 I transitioned to the Human Resources department and stayed there until my trip around the world.

Education is one thing, personality and experience is another. If you had to describe yourself with three adjectives, which three would they be?

Now you're asking me questions I usually ask my candidates. (Laughs.) I think I'm a pretty positive person. I am solution oriented and mostly in a good mood.

Yeah, that's how I see you, too. You always seem to be in a good mood and full of energy. How do you do that?

One part is simply my personality. I find that I get through life better as a positive thinking person. If you look grouchily at the world, it will come back to you. Besides, I really enjoy my job. I draw peace and energy from nature. For example, I like to go jogging and walking. I enjoy the peace and quiet after work, as well as some time for myself. I read a lot and on weekends I cook something delicious.

How does a normal day in your job go?

I am in the office early in the morning because I have many tasks that require my full attention. From 7 to 8 o'clock I catch up on emails without distractions. I usually schedule interviews with applicants from 8:30 a.m. and beyond. After the interviews, the post-preparation for additional appointments takes place. I structure my day in blocks, because structured work and great preparation going into a conversation are very important for me.

More appointments will follow in the afternoon. My day basically consists of meetings with my superiors, employees and applicants, including their preparation and follow-up.

Are there also things that you would like to change or improve?

We have potential to make our company even better known. Especially among students. For this reason, we will expand our cooperation with the Lucerne University of Applied Sciences and Arts (HSLU), z. B. through regular specialist lectures in the future. Also, we would like to work even more closely with other universities. 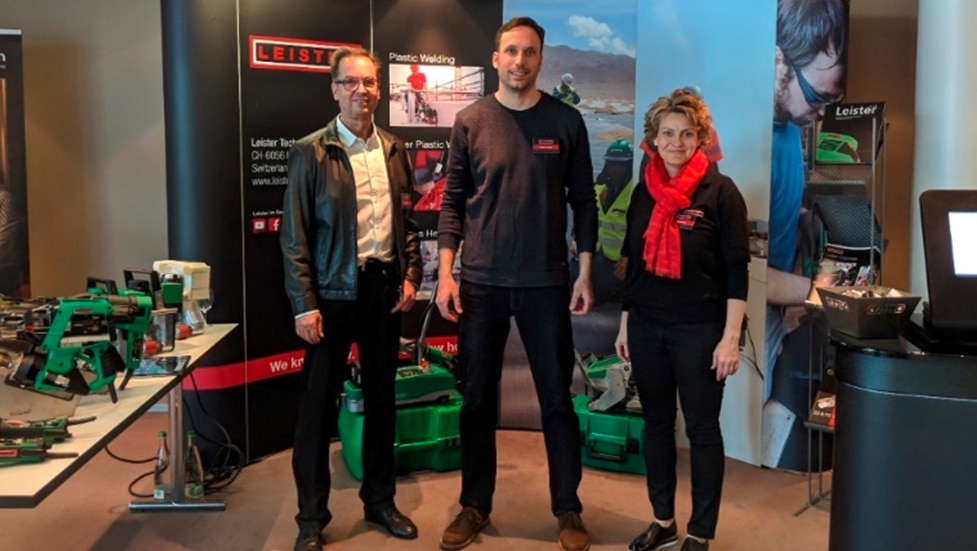 We were already able to welcome the responsible persons from the University of Applied Sciences Fribourg in Kägiswil. We had the opportunity to introduce our company, as well as hot-air and laser welding in more detail.

We will definitely be present at the contact meeting at the Lucerne University of Applied Sciences and Arts (HSLU) and the Polymesse of the ETH Zurich next year. We get to know many exciting people and potential employees at these job fairs for students . For example, at the 2018 HSLU contact meeting, we got into many conversations with students. Three of them decided to take a job with Leister in the same year.

I also have a personal goal. The entire application market is in a state of change. People no longer apply so actively, but we have to search for and win them over on various channels, like social media platforms, for example. Digitization will also change the way we work and how we work together. That's why I continue my education in this area and completed the CAS work 4.0: Digital Collaboration & New Work 2019. I'm now 46, so I have 20 more years of work ahead of me with the challenges of an obvious digital change. It is important to me to react correctly and in time to changes.

How has Leister developed since you started to work here in 2013?

Leister has become bigger and bigger. Before the new building for our production, which was ready for occupancy in July 2019, we almost didn’t have enough work stations for new employees. When I joined Leister in December 2013, we had 600 employees worldwide, and since August 2019 we have around 900.

What are some of your highlights, or in other words, what do you enjoy most about your job?

What I enjoy most is the contact with people. Be it internal or external. I also like the diversity of my job. I wouldn't be cut out for a job that involved only numbers. Also, I really appreciate the cooperation within Leister because it is based on trust.

Leister is an exciting company. We are at home in one of the smallest cantons of Switzerland and are globally recognized and successful. I like the down-to-earth approach and at the same time the innovative strength of our company.

What's next on your schedule?

An interview with a candidate, but of course I cannot tell you the name.

If I am looking for a job at Leister, how and where is the best way to apply?

The best way is online for an advertised position or just spontaneously, because I also like to check out spontaneous applications.

Thank you for the interesting conversation and the insight into your professional development. Good luck with your continued education!