Ceremonial Opening of the Leister Extension 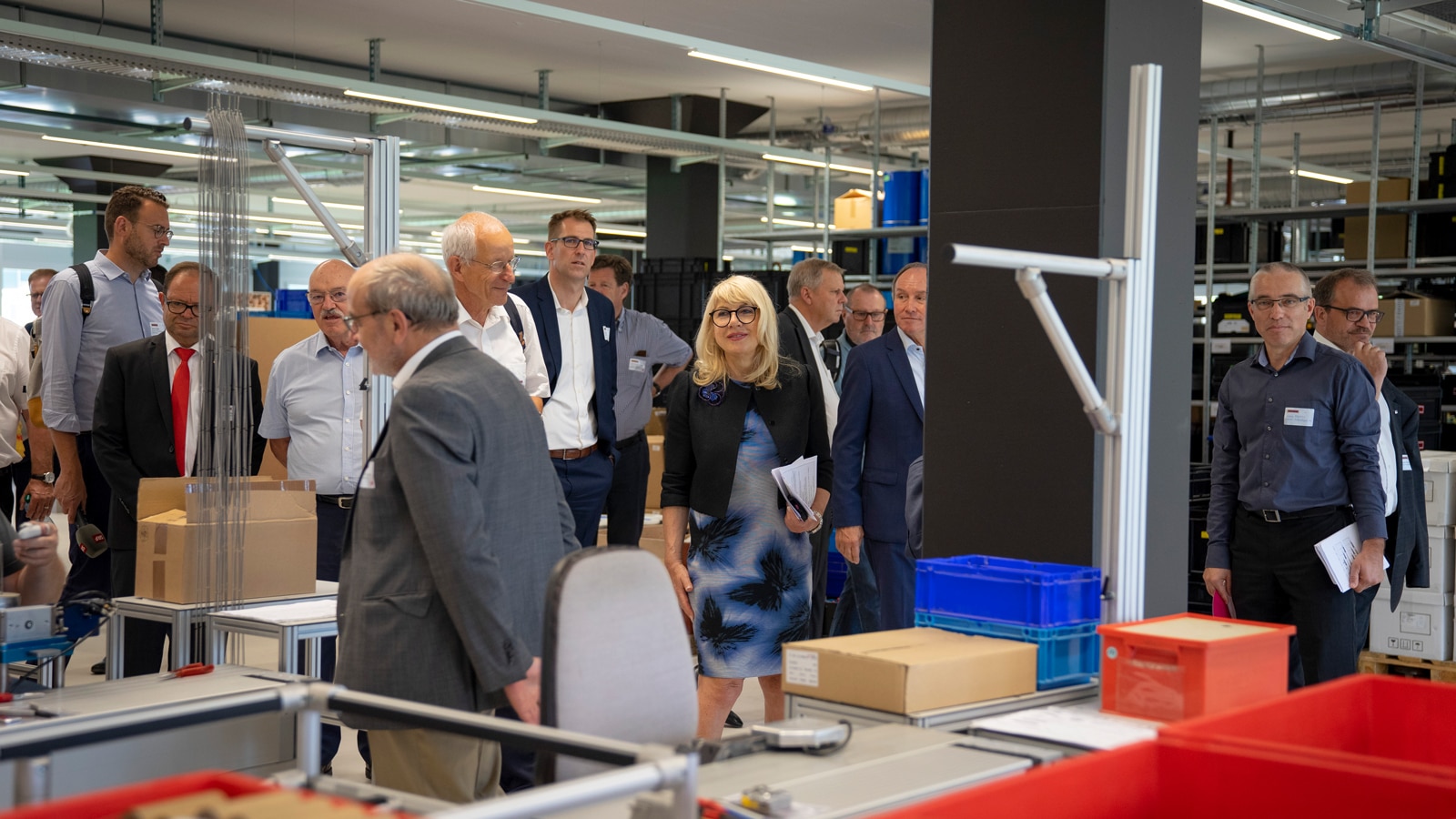 Among the approximately 160 invited guests were Dr. Josef Hess, Chief Administrative Officer of the Canton of Obwalden and other members of the Government Council and the Cantonal Council of Obwalden, Jürg Berlinger, Mayor of Sarnen, Hans Hess, President of Swissmem, numerous business partners and suppliers of the Leister Group as well as well-known personalities from the worlds of business, education, culture and science from all over Switzerland.

Leister has invested a total of 25 million Swiss francs in the extension. Production has been taking place in the new premises since May 2019.

Fabienne Bamert, facilitator at Tele1 (Zentralschweizer Fernsehen), hosted the event, welcomed the guests and thanked them on behalf of Leister for sending in the numerous greetings messages.

From a sole proprietorship to a high-tech corporate group

In her first speech, Christiane Leister, Chairperson of the Board and owner of the Leister Group, referred to the 70-year history of her company and its development over the past decades: «Founded in 1949 by Karl Leister as the sole proprietorship ‹Karl Leister Elektrogerätebau› in the basement of his parents' house in Solingen, the company has since developed into a high-tech group of companies with subsidiaries on three continents».

The customers of the Leister Group come from all countries and all industrial sectors:

«This list could be extended at will. In short, our customers come from wherever plastics need to be thermally combined or when industrial process heat is required,» says Christiane Leister.

In 1998, EPFL (École polytechnique fédérale de Lausanne) technologies were used to diversify into new business areas and a microtechnology start-up company was acquired and expanded. From this, Axetris AG has arisen and become a successful company with 130 employees. Axetris is located in Kägiswil and has clean rooms in which micro-optical components and gas sensors are developed and produced.

All over the world and around the clock people come into contact with infrastructure and products that were created with devices of the Leister Group. Here are a few examples:

The Ried II extension, in which the opening ceremonies took place, was financed from own resources and cost 25 million Swiss francs. The new building was added to the existing production building in order to consolidate the production of Leister Technologies AG at one location. «This gives us long-term capacity reserves.» The aim is to increase efficiency – a necessary prerequisite for maintaining and further expanding and strengthening the world's leading market position.

In an extremely globalized world, the Leister Group is also confronted with major changes in its geopolitical and social environment, as Christiane Leister makes clear in her speech: «The challenges to continue the Leister success story have become no less or easier. In addition to expertise, commitment, flexibility and the ability to change, speed is your friend.»

At the end of her speech Christiane Leister thanked the guests for taking part in the opening ceremony of the extension building Ried II, customers and business partners for their trust and the pleasant and successful collaboration, the government of Obwalden, the municipality of Sarnen and the authorities for the good partnership. The short decision-making paths are very much appreciated.

Information about the new building

At the beginning of his speech, Beat Mettler, CEO of Leister AG, welcomed the representatives of Implenia, the architects and planners and all the companies involved in the project. As CEO, Beat Mettler is responsible for all operations of the Leister Group around the world. 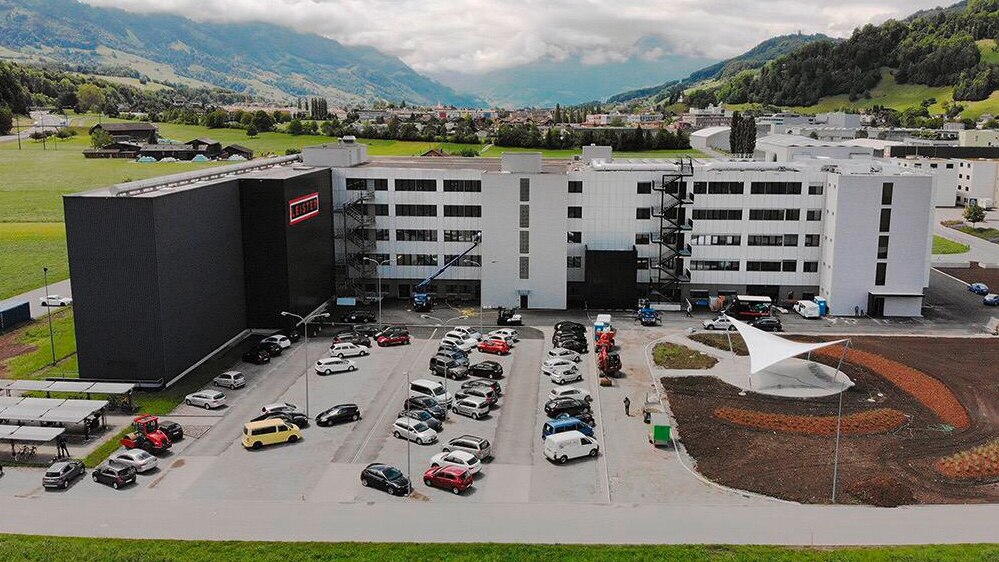 In his speech, he gave information about the new building, an extension of the Leister Technologies production building in Sarnen, which has been in existence since 1998. Due to the tremendous growth of the entire Group, it was decided in autumn 2016 to expand the production areas of the two companies Leister Technologies AG and Axetris AG.

Since the production building of Leister Technologies AG in Sarnen is located in an area with a high groundwater level, a solid foundation with a total of 295 bored piles, each 25 m / 82 ft long, had to be created as a first step. The total length of the piles is 7.3 km / 4.54 mi. The building was also designed earthquake-proof.

After the foundation had been laid, work began on the shell. For this, some 900 truckloads of concrete, equal to a truck convoy of about 8 km / 4.97 mi in length, was used.
Although the interface to the existing building posed a challenge, there were no production downtimes. «However, some employees had to temporarily do without the wonderful view of the Obwalden Mountains they were used to,» says Beat Mettler.

According to Beat Mettler, a particularly climate-friendly approach was adopted for the extension.
The entire building is heated by a groundwater heat pump with a plate heat exchanger and cooled in summer by heat recovery. The system is further supported by the solar wall on the high-bay warehouse. In addition, the heat generated during production is also recovered and fed into the system.

Extension and supplementation of the existing photovoltaic system 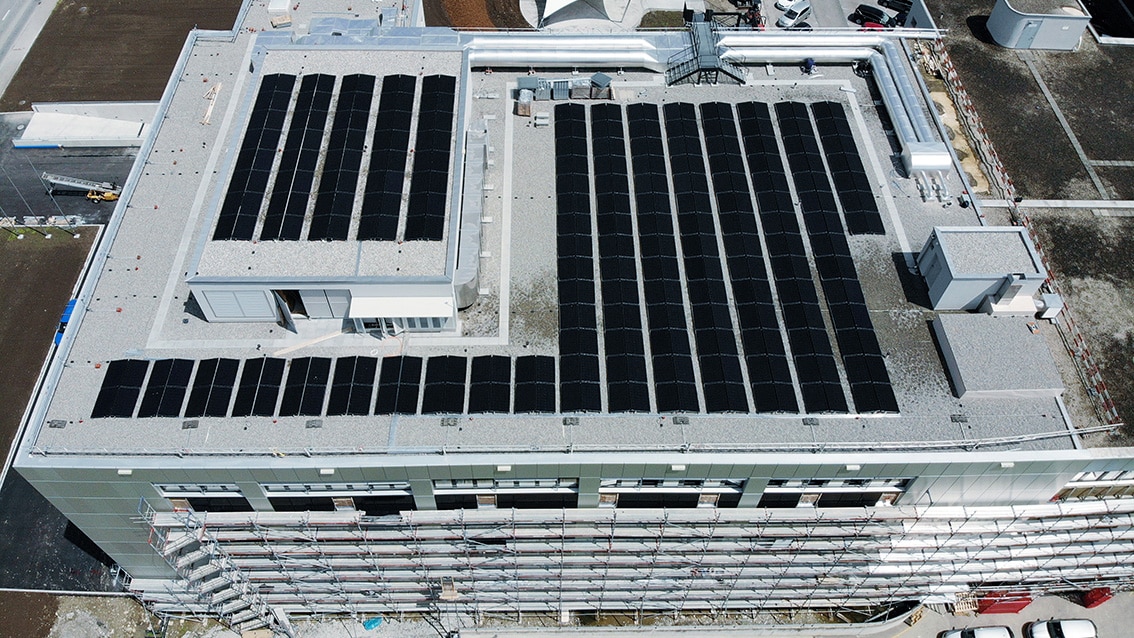 The entire extension has been constructed in accordance with the Minergie standard. Ninety percent of the total energy demand is covered by renewable energy. Seventy five percent of this by local hydroelectric power. The entire building is carbon neutral.

Two years and four months have passed since the first planning meeting in January 2017 until the final acceptance of the completed building. 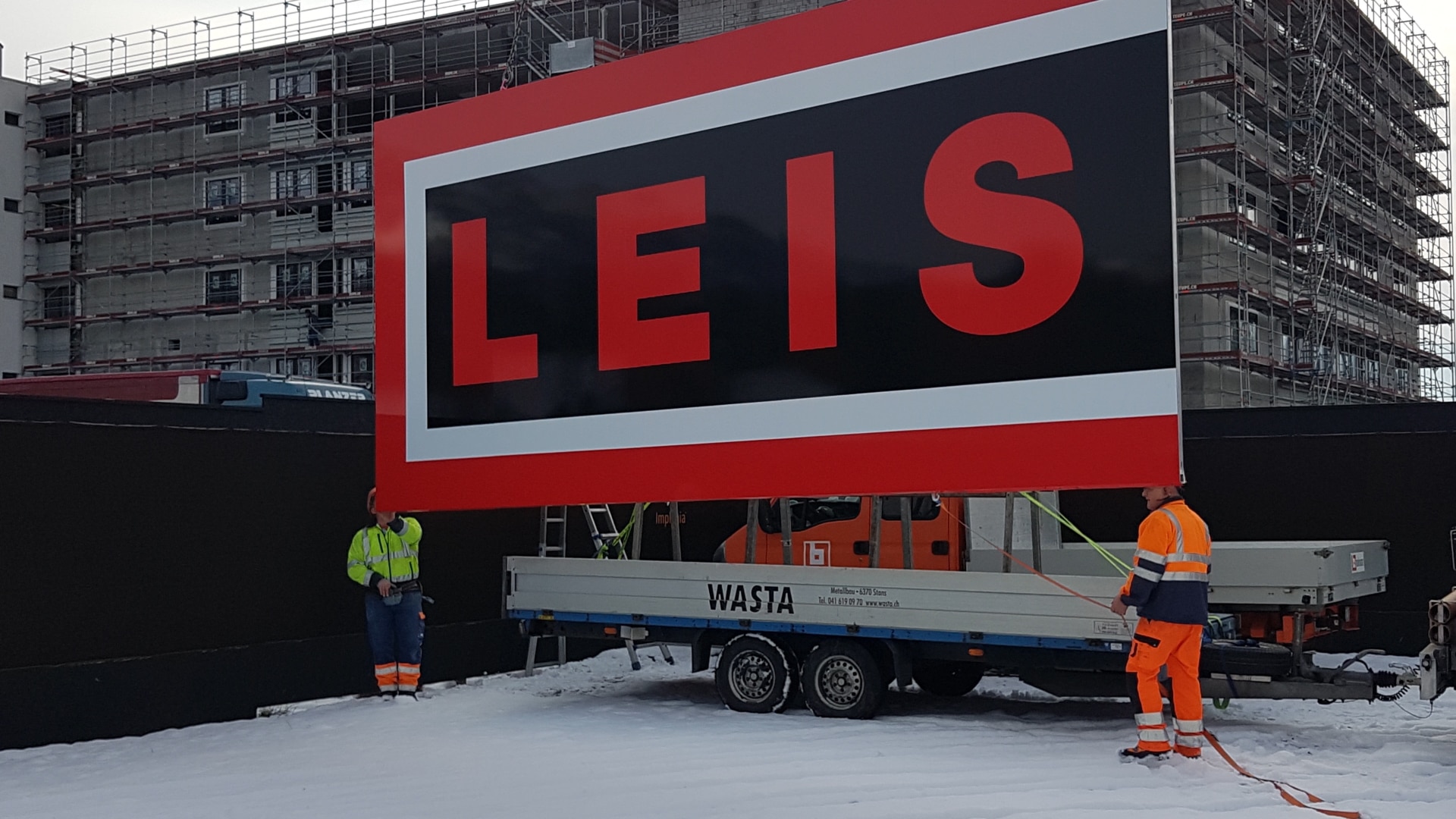 During this time a highly complex production building was constructed with

This is the basis for a modern and efficient production site for the Leister Group that meets the new requirements of «Industry 4.0».

At the end of his speech, Beat Mettler thanked all the entrepreneurs and their reliable employees for their tireless efforts. His special thanks go to Implenia, which accompanied the construction project as a total contractor, as well as to all craftsmen and the responsible authorities for their efficient support.

The greeting message of the Obwalden government was delivered by Landammann Dr. Josef Hess.

In his speech, he informed the audience that Leister set up its first company location in Switzerland in Kägiswil in 1963. «Here in Obwalden, we are still more than grateful that Kägiswil in Obwalden was chosen at the time. Leister is now Obwalden's flagship and the second largest employer in the canton.» 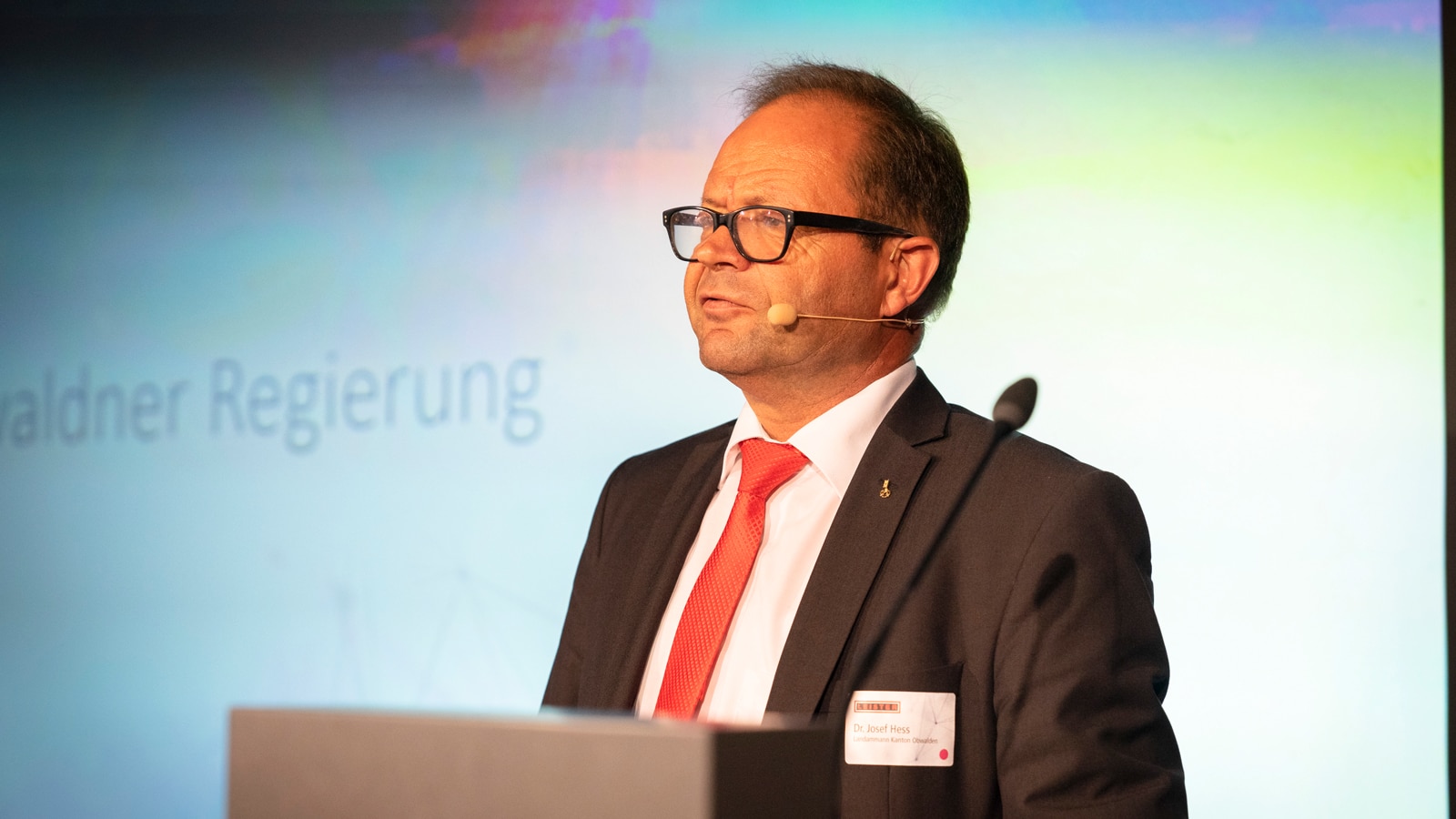 He then paid tribute to Christiane Leister's personal commitment to Tüftelpark Pilatus, to swinging (Leister is an association sponsor of Innerschweizer Schwingerverbandes ISV (Central Swiss Swinging Association)) as well as to political issues. He is particularly pleased with Christiane Leister's commitment as a member of the ETH Board. In this function, she represents the name of the Canton of Obwalden around the world.

The extension is another milestone in the 70-year success story of the Leister Group. The speed with which the building was erected was also a very impressive achievement for him as construction director and engineer. During his visit in February 2019, he was particularly impressed by the small parts warehouse with its more than 8,000 storage spaces. «And as Energy Minister, I am particularly pleased at how much attention has been paid to sustainability in this project. At Leister, climate protection is an important issue that is followed up by action.» At the end of a speech, Landammann Dr. Josef Hess thanked the Leister Group for its commitment to Obwalden as a business location and congratulated it on its 70th anniversary. «I am convinced that Leister will remain the flagship of Obwalden for decades to come.»

Hans Hess, President of Swissmem, then expressed a message of greeting. Swissmem is the leading association for SMEs and large companies in the Swiss machinery, electrical and metal industry (MEM industry) and related technology-oriented sectors, of which Leister has been a member for many years. 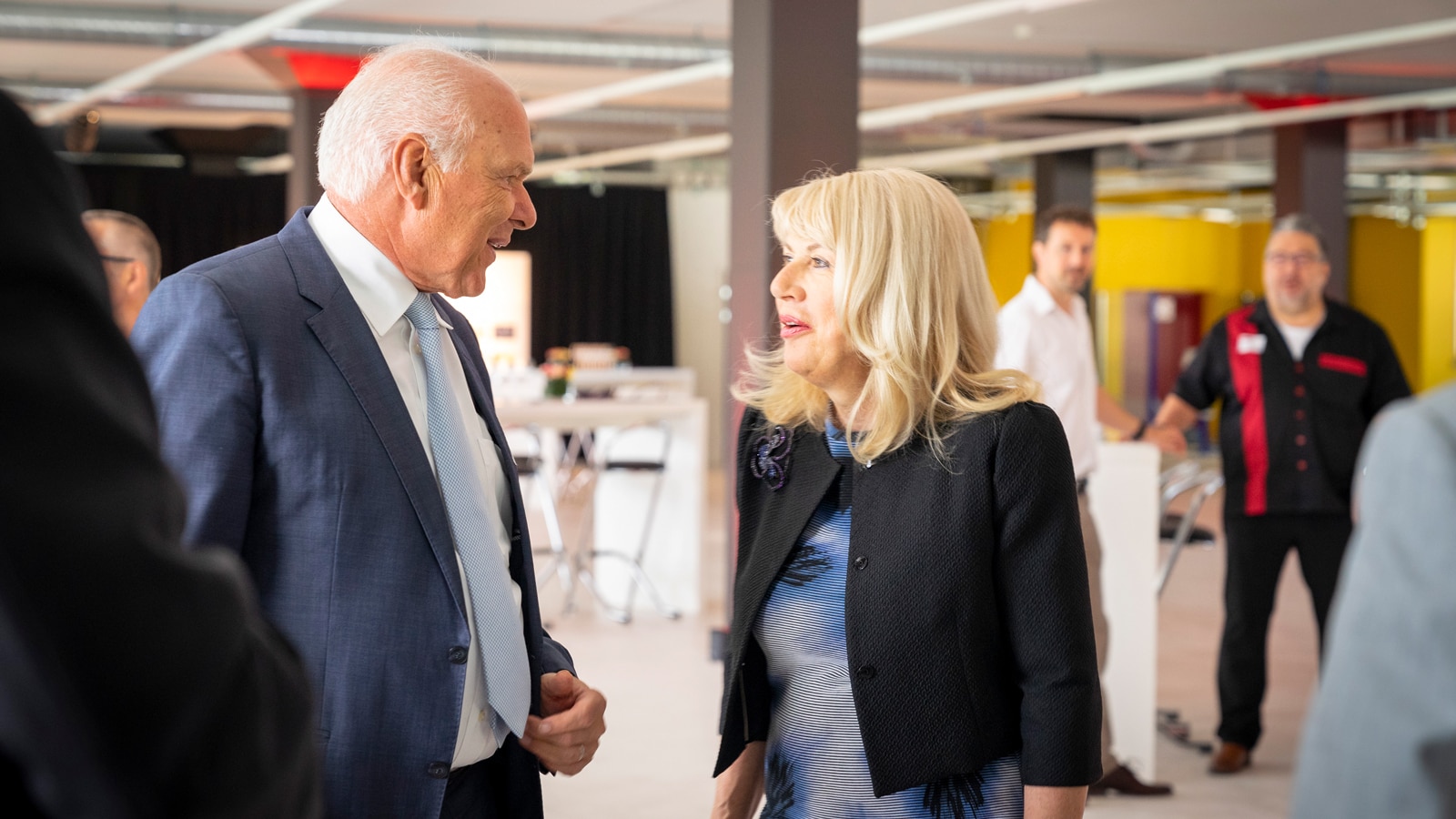 Hans Hess also congratulated the Leister Group on its 70th anniversary. «Nowadays it is not a matter of course – and therefore all the more gratifying – that a company like this should invests here in Switzerland.» However, there are good reasons for this: «Political stability is one of Switzerland's strengths.»

In addition, Switzerland's dual education system plays an important role, as the success of the company depends on qualified employees who perform outstandingly and make Swiss companies market leaders around the world. From his point of view, the Leister Group embodies all of this.

Traditional cutting of the ribbon

Following the speeches and the greetings, the extension building was ceremoniously opened by the traditional cutting of a red ribbon.

Tour of the Leister production facility 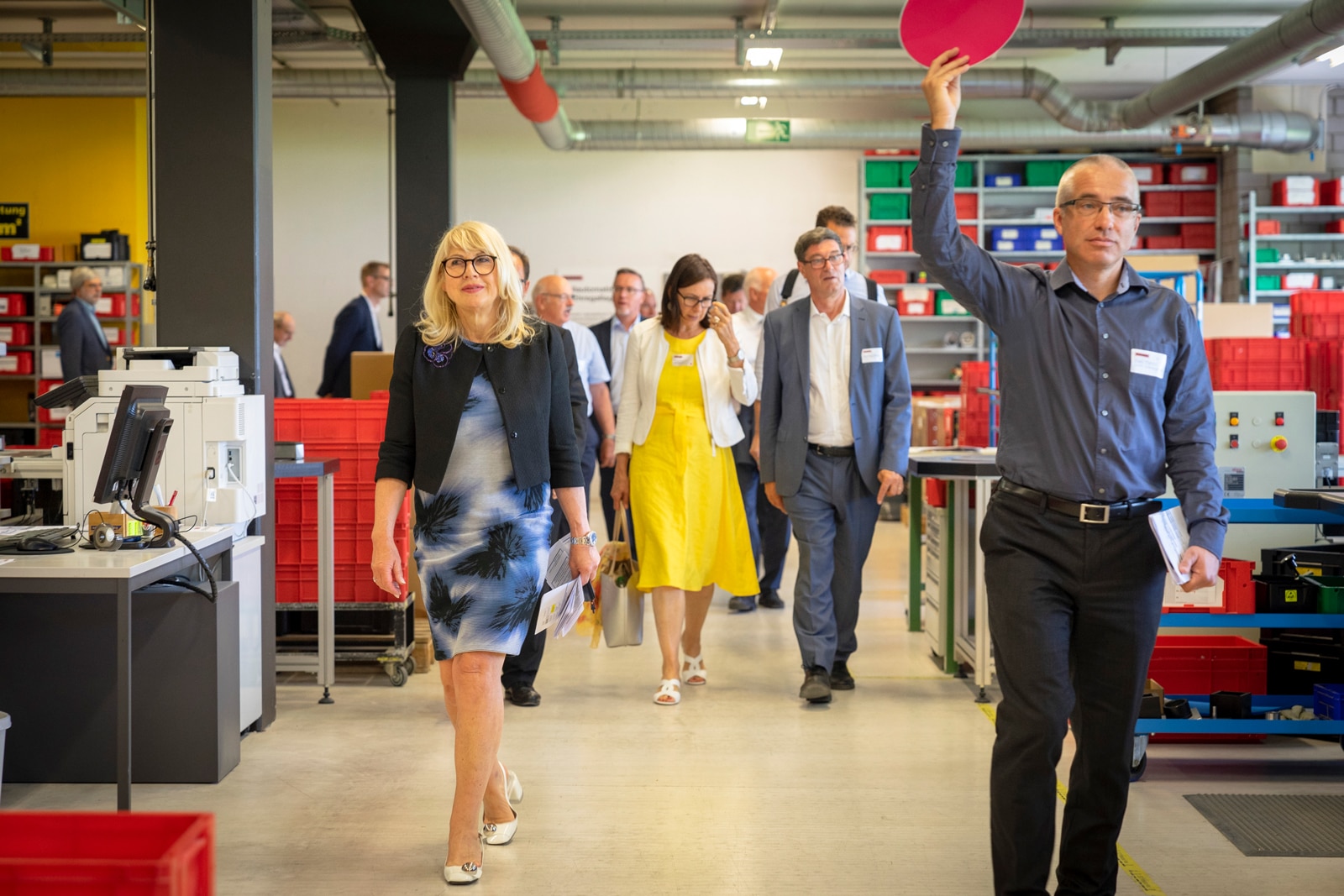 The program included the high-bay warehouse, the small parts warehouse, the production facility of the automatic welding machines, the heating elements, which form the core components of the Leister hot-air systems, and the modern offices on the fourth floor.

After the tour of the production site, the guests had the opportunity to exchange ideas during a flying lunch.

Planting a remembrance tree and burying a time capsule

At the end of the event, the guests went outside to plant a Ginkgo tree and bury a time capsule with greeting messages.

Thank you to our external partners

Many thanks to our external partners for their cooperation and professional support of our event.

Media reports on the opening event

Here you can find all media reports on the opening event.